I’ll describe my current LaTeX setup – vim, skim, and latexmk. I currently write notes and papers using LaTeX on a Mac, though in a previous life, my setup on Linux was very similar (i.e., s/macvim/gvim/g and s/skim/zathura/g). I like being able to use my own customized text editor (with my favorite keyboard shortcuts) to edit a raw text file that I can then put under version control. Though I describe things with respect to vim, most of this setup can also achieved with some other text editor, e.g., emacs or sublime.

I use the text editor, vim. For writing documents, I often also like using macvim, which is basically vim but with a few extra GUI features, such as scrolling and text selection features.

For my pdf reader, I use the Skim app. The nice thing about Skim is that it will autoupdate the pdf after you compile the tex and keep the document in the same place. By contrast, Preview will refresh the document and reload it from the beginning of the document, which is quite cumbersome if you’d just edited text on page 5.

In vim, I have several keybindings set up in my .vimrc file. Currently, I compile the .tex file using latexmk. Files can be compiled to pdf with the command

I have the following key bindings in vim:

For instance, the compile keybinding above is done by adding the following line to the .vimrc file

These types of key bindings can usually be setup with other text editors as well.

Putting it all together

When I’m writing a document, I’ll often have my text editor full screen on the left and the Skim on the right with the pdf open. After making edits, I’ll press control-T to compile and the pdf will auto-refresh in Skim. 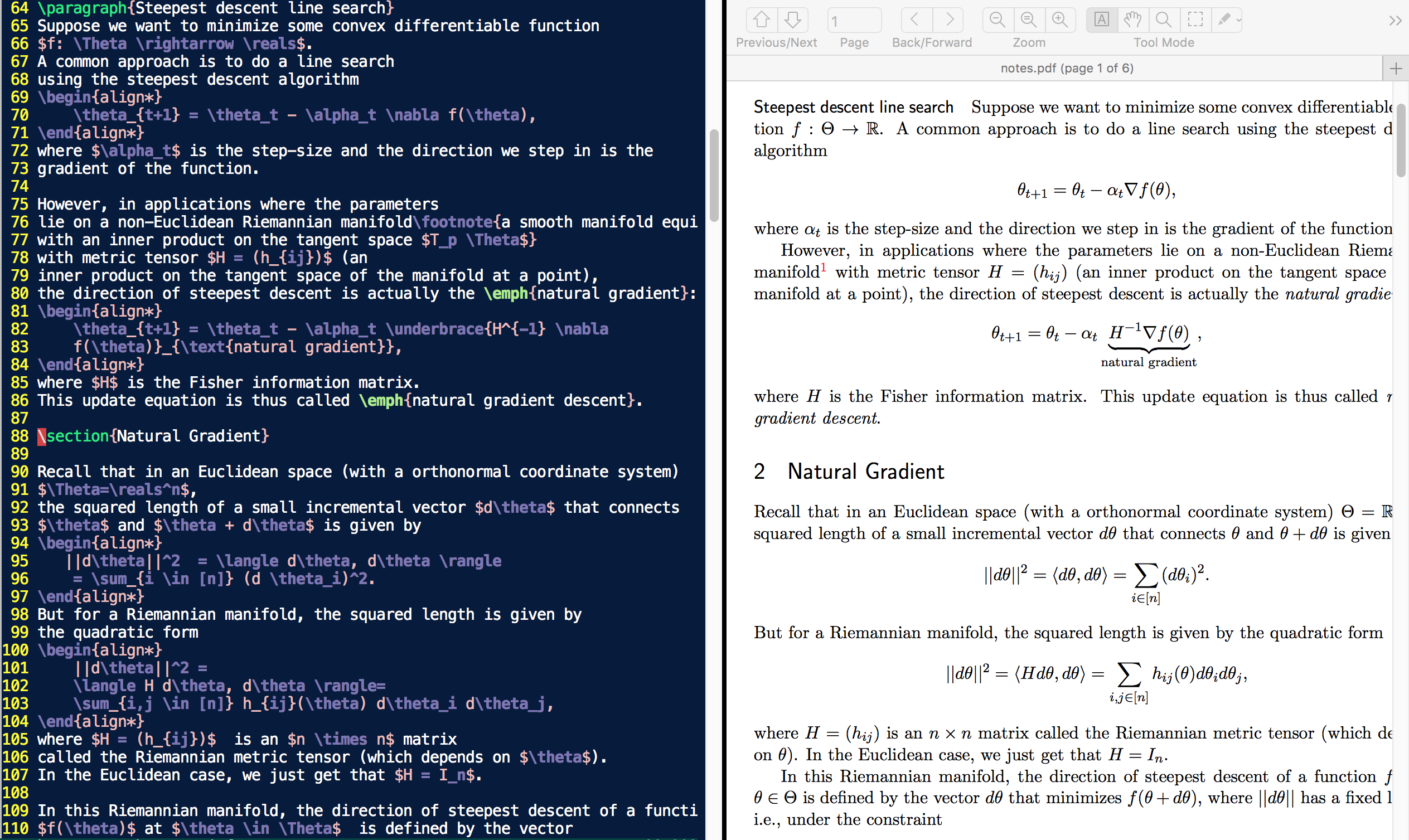 Example of macvim next to Skim setup. Monitor recommended :)

There are a few other tools that I use for writing papers (or extensive notes on work) that I’ll list below that save me a lot of time.

In vim, I have several plugins I have in my .vimrc file. For writing papers, I use ()[snippets] extensively. My most used command is typing begin <tab>, which allows me to allows me to autocomplete the parts of LaTeX that I don’t want to spend time typing but use often. For instance, in the TeX below, snippets means I only have to type align* once.

And should I need to change align* to just align, I only have to edit this in one of the parens instead of in both lines.

To use vim plugins (after installing), you just need to add the github page to your .vimrc file, e.g., for Ultisnips, add the line

and execute :PluginInstall while in command mode in vim.

For writing quick notes, I have a TeX skeleton file that always loads when I start a new vim document, i.e., when executing vim notes.tex in the command line, a fully-functional tex skeleton with all the packages I normally use and font styles are automatically loaded. E.g., a version of the following:

For longer documents, I use the subfiles package extensively. This allows me to split a document into smaller files, which can then be individually compiled into its own document. Subfiles inherit the packages, etc., that are defined in the main file in which the subfiles are inserted.

The advantage of using subfiles is that you can just edit the subfile you’re currently focusing on, which is much faster than compiling the entire document (especially one with many images and references). This also helps with reducing the number of git conflicts one encounters when collaborating on a document.

I have a set of macros that I commonly use that are imported when I load a .tex document. For writing papers, I’ll include a separate macros.tex file with all of my macro definitions that I reuse often. Some example macros I’ve defined:

Also super convenient if you’re defining a variable that is always bold if, for instance, that variable is a vector.

My collaborators and I often have a commenting file we use to add various comments (in different colors too!) in the margins, in the text, or highlighting certain regions of the text. An alternative is to use a LaTeX commenting package and then define custom commands controlling how the comments appear in the text.

You can check out my .vimrc file on github to see how I set up keybindings, plugins, and my .tex skeleton file.